The Report informs key decision makers around the world about the burden that pollution places on health and economic development, and about cost-effective pollution control solutions and strategies.

The Report from The Lancet Commission on Pollution and Health analyzes and communicates the massive scope of the health and economic costs of air, water and soil pollution. Through analyses of existing and emerging data, the Report reveals pollution’s severe and underreported contribution to the Global Burden of Disease. It uncovers the economic costs of pollution to low- and middle-income countries, and compare the costs of inaction to the costs of available solutions. It informs key decision makers around the world about the burden that pollution places on health and economic development, and about cost-effective pollution control solutions and strategies. The Commission will bring pollution squarely into the international development agenda. 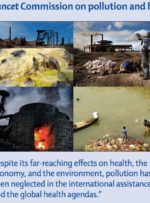 Click here for the full report, summary, and to listen to podcast featuring Gina McCarthy, former EPA Administrator, and Commission leads Philip Landrigan and Richard Fuller join Gavin Cleaver for a discussion of the problems of pollution and the solutions available. 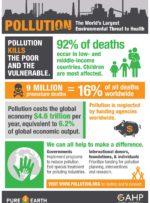 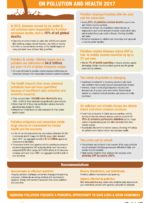 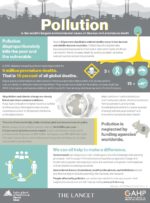 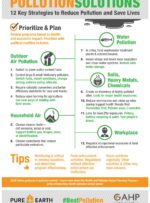 Diseases caused by pollution were responsible in 2015 for an estimated 9 million premature deaths – 16% of all deaths worldwide – three times more deaths than AIDS, tuberculosis, and malaria combined; and fifteen times more than all wars and other forms of violence. It kills more people than smoking, hunger and natural disasters. In some countries, it accounts for one in four deaths.

Nearly 92% of pollution-related deaths occur in low- and middle-income countries. Within countries, pollution’s toll is greatest in poor and marginalized communities. Children face the highest risks because small exposures to chemicals in utero and in early childhood can result in lifelong disease and, disability, premature death, as well as reduced learning and earning potential.

Fossil fuel combustion in higher-income countries and the burning of biomass in lower-income countries accounts for 85% of airborne particulate pollution. Major emitters of carbon dioxide are coal-fired power plants, chemical producers, mining operations, and vehicles. Accelerating the switch to cleaner sources of energy will reduce air pollution and improve human and planetary health.

Despite significant health impacts, the international development and health agendas have largely overlooked pollution. Funding is sparse when compared to resources for infectious disease and other environmental issues. No large foundations include environmental health and pollution as a focal area. Pollution control will also advance several of the Sustainable Development Goals.

Despite the fact that more than 70% of the diseases caused by pollution are non-communicable, interventions against pollution are barely mentioned in the Global Action Plan for the Prevention and Control of Non-Communicable Diseases.

Spending on pollution-related diseases accounts for up to 7% of health budgets in middle-income countries. Welfare costs from pollution are estimated to be $4.6 trillion per year – equivalent to 6.2% of global GDP.

In the United States, each dollar invested in air pollution control has returned an estimated $30 (USD) in benefits (range, $4 – $88) since 1970. Higher IQs and increased productivity from removing lead from gasoline has returned an estimated $200 billion (range, $110-$300 billion) each year since 1980 ($6 trillion total). The claim that pollution control stifles economic growth and that poor countries must pollute to grow is false.

Transition toward a circular economy will reduce pollution-related disease and improve health. Decoupling development from the consumption of non-renewable resources will minimize the generation of pollution and other forms of waste by recycling and reuse.

Actions for people affected by pollution:

What’s Novel About The Report’s Findings

2. The report features solutions and recommends how the problem can be solved. It includes examples and case studies of pollution control success.

3. The report details gaps in our data and knowledge of pollution’s toll, showing a need for research into soil, heavy metals and chemicals related to the burden of disease as these aspects do not have fully defined risk factors, and therefore are significantly underestimated.  Other gaps in knowledge related to exposures, and disease correlations are also indicated, including those associated with developmental neurotoxicants, endocrine disrupters, new classes of pesticides, chemical herbicides, and pharmaceutical wastes

4. It highlights aspects of pollution that have been largely ignored in development circles, despite their significant toll on human health.

5. The report’s speaks to a broad audience and aims to elevate pollution to an issue of global scale, ready for solutions.  The authorship is rich and deep in policy and political figures as well as academics.  Input was provided by major global actors, including World Bank, UNEP, UNDP, European Union, and dozens of bilateral and international organizations, all under the umbrella of the Global Alliance on Health and Pollution.

6. The preparation of the report already has seeded results. UN Environment’s next global conference will focus exclusively on pollution and the WHO has increased its focus on pollution-related disease.

7. The report has new science.  Several sub-risk factors of soil, chemicals and heavy metals have been fleshed out, showing a path for more detailed work in this underserved area.

8. The connection between pollution and the Sustainable Development Goals is also made, showing pollution playing a part in achieving many aspects of the SDGs.