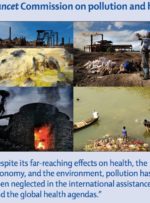 For decades, pollution and its harmful effects on people’s health, the environment, and the planet have been neglected both by Governments and the international development agenda. Yet, pollution is the largest environmental cause of disease and death in the world today, responsible for an estimated 9 million premature deaths.

The Lancet Commission on pollution and health addresses the full health and economic costs of air, water, and soil pollution. Through analyses of existing and emerging data, the Commission reveals pollution’s severe and underreported contribution to the Global Burden of Disease. It uncovers the economic costs of pollution to low-income and middle-income countries. The Commission will inform key decision makers around the world about the burden that pollution places on health and economic development, and about available cost-effective pollution control solutions and strategies.

Read the report and learn more.

Modern pollution – pollution attributable to industrialization and urbanization – is responsible for nearly 6 million deaths per year, more than all the deaths from HIV, malaria, and tuberculosis combined; yet it receives comparatively little attention in the international development agenda.

Based on reported ODA spending for 2016, the paper’s analysis shows an average investment of $14/death for modern pollution, compared with $1,250/death for malaria, $190/death for tuberculosis, and $165/death for HIV/AIDS.

Published in the International Journal of Public Health. This was part of the special issue “Driving the Best Science to Meet Global Health Challenges” edited on the occasion of the 9th European Congress on Tropical Medicine and International Health 2015.

Environmental pollution—contamination of air, water and soil by human activity—is the largest cause of disease and death in low- and middle-income countries (LMICs). The World Health Organization (WHO) estimates that 8.9 million persons die each year of diseases caused by pollution, 8.4 million (94 %) of them in poor countries (WHO 2014a, b). By comparison, HIV/AIDS causes 1.5 million deaths per year (WHO2014c), and malaria and tuberculosis cause fewer than 1 million deaths each (WHO 2014d).

Burden of Disease from Toxic Waste Sites in India, Indonesia, and the Philippines in 2010

Knowns and Unknowns on Burden of Disease Due to Chemicals: A Systematic Review

Knowns and unknowns on burden of disease due to chemicals