The Commission on Pollution and Health is an initiative of The Lancet, the Global Alliance on Health and Pollution (GAHP), and the Icahn School of Medicine at Mount Sinai.

Commissioners include many of the world’s leading researchers and practitioners in the fields of pollution management, environmental health and sustainable development.

Co-Chairs of the Commission:

Please call to to check availability of these other global experts:

“Pollution is much more than an environmental challenge – it is a profound and pervasive threat that affects many aspects of human health and wellbeing. It deserves the full attention of international leaders, civil society, health professionals, and people around the world,” says Commission co-lead, Professor Philip Landrigan, Icahn School of Medicine at Mount Sinai, USA. “Despite its far-reaching effects on health, the economy and the environment, pollution has been neglected in the international assistance and the global health agendas, and some control strategies have been deeply underfunded. Our goal is to raise global awareness of the importance of pollution, and mobilise the political will needed to tackle it, by providing the most in-depth estimates of pollution and health available.”

“Pollution, poverty, poor health, and social injustice are deeply intertwined. Pollution and related diseases most often affect the world’s poor and powerless, and victims are often the vulnerable and the voiceless. As a result, pollution threatens fundamental human rights, such as the right to life, health, wellbeing, safe work, as well as protections of children and the most vulnerable.” Says Commission author Karti Sandilya, Pure Earth, USA.

“In order to tackle pollution, we must prioritise it as an issue that affects us all, integrating it into health planning, and increasing funding to allow more research into pollution, such as monitoring pollution and its effects, and developing ways to control pollution,” says Commission co-lead, Richard Fuller, Pure Earth, USA. “Pollution can be eliminated, and pollution prevention can be highly cost-effective – helping to improve health and extend lifespan, while boosting the economy. This has been seen in high-income and some middle-income countries where legislation has helped to curb the most flagrant forms of pollution, and has led to cleaner air and water, lower blood lead concentrations, removal of hazardous waste sites, and less polluted and more liveable cities.”

Writing in a linked Comment, Dr Richard Horton, editor-in-chief, and Dr Pamela Das, Senior Executive Editor of The Lancet say: “No country is unaffected by pollution. Human activities including industrialisation, urbanisation, and globalisation, are all drivers of pollution… We hope that the findings and recommendations from this Lancet Commission will also marshal action in the health and development sectors, and persuade leaders at the national, state, provincial, and city levels to make pollution a priority. Although there is some activity on pollution internationally, much more is needed… This Lancet Commission should inform policy makers and serve as a timely call to action. Pollution is a winnable battle.”

These photos appear on the cover of the report from The Lancet Commission on Pollution and Health. You may use these for coverage related to the report. They MUST be credited:

An interactive map illustrating the data from the study will be available post-embargo via: 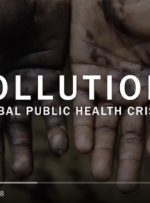