Meet a 2015-er: Behind-the-scenes of the SDG negotiations 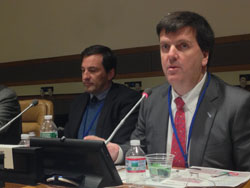 The latest installment of the U.N. Dispatch’s “Meet A 2015-er”  – a series that profiles the women and men who are helping to shape the Sustainable Development Goals and Climate Change negotiations as they take form later this year –  features Richard Fuller, President of Pure Earth, which serves as Secretariat to the GAHP.

Fuller talks about how GAHP launched an initiative to make sure toxic pollution was addressed in the SDGs, which lead to the target written in 3.9.

He also clarified the sometime confusion between climate change issues and pollution:

Climate change is more about the carbon released in the air, which is not inherently harmful to people. The pollution we’re talking about are the fine particles released along with that carbon that are actually harmful to people’s health, the waste spilled into water sources, the chemicals leaked into soil that makes its way into plants and animals.

In another article in Ideas for Development, Fuller explains why pollution fell off the radar.

The reason pollution dropped from the environment agenda is, of course, the focus on biodiversity conservation and, latterly, climate change. But it also fell from – or, rather, never came on – the world’s public health radar. This is likely because it is “only” a risk factor and not a disease. Yet this attitude can no longer be justified, with the growing acceptance of the disability-adjusted life year (DALY) as the yardstick for health impact assessment.

The DALY extends the concept of potential years of life lost to premature death to include equivalent years of ‘healthy’ life lost to states of poor health or disability. It combines mortality and morbidity into a single, common metric.  Efforts are underway to quantify the burden of disease resulting from exposure to pollution. A study of toxic sites in India, Indonesia and Philippines estimated that exposure to industrial pollutants in 2012 resulted in 830,000 DALYs, while outdoor air pollution at those sites accounted for 1,450,000 DALYs. In comparison, DALYs resulting from malaria were estimated as 725,000. In other words, DALYs from toxic pollution were three times that from malaria.