Understanding the scale of the problem and the urgenT NEED for action.

There is a growing body of  data on the link between pollution and health, and the impact of toxic hot spots on the health of low-income communities.  GAHP’s leadership in co-chairing The Lancet Commission on Pollution and Health  communicated the massive scope of the health and economic costs of air, water and soil pollution. Through analyses of existing and emerging data, the Report revealed pollution’s severe and underreported contribution to the Global Burden of Disease.  Key decision makers at national and international levels need to be aware of the scale of this global threat. There is now a growing amount of scientific literature on the scale and impacts of the pollution crisis. Key papers are included here. 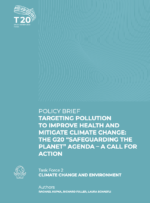 Pollution is the single largest environmental risk factor for premature death globally. It is a major driver of climate change. It is also a significant contributing factor to the severity of the COVID-19 pandemic, and a burden on economic growth. This policy brief explores how G20 countries should work to minimize the adverse health and economic outcomes of global pandemics by committing to ensuring clean air, water, and soil for all. 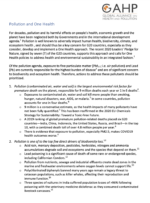 Pollution and One Health Brief

The intersection of pollution with health, biodiversity, ecosystems, climate change, and economic growth and the rapid pace at which results can be seen, felt, and measured make pollution mitigation a valuable policy target.

In this brief, GAHP argues that as we “build back better” post-COVID-19, G20 countries should take a One Health approach that puts human health, biodiversity, climate and the environment at the heart of their recovery strategies, and commit to preventing and reducing pollution in order to ensure clean air, water, and soil for people and nature. 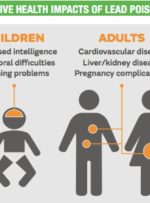 The Global Burden of Disease from Lead Pollution

Approximately one third of the world’s children are lead poisoned—as many as 800 million globally—at or above the WHO threshold and US CDC action level of 5 μg/dL.2

In this fact sheet – The Global Burden of Disease From Lead Pollution – learn more about the health impacts, sources of lead poisoning, the economic costs, and solutions to this global crisis. 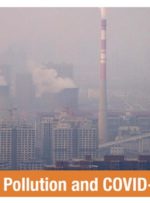 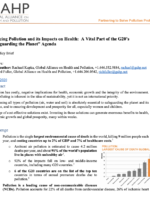 Reducing Pollution and its Impacts on Health: A Vital Part of the G20’s “Safeguarding the Planet” Agenda

Pollution has costly, negative implications for health, economic growth and the integrity of the environment. Not polluting is inherent in the idea of sustainability, yet it is not an international priority. Addressing all types of pollution (air, water and soil) is absolutely essential to safeguarding the planet and its citizens, and to ensuring development and prosperity for all, especially women and children. A range of cost-effective solutions exist. Investing in those solutions can generate enormous benefits to health, economic growth and global prosperity, many within weeks. 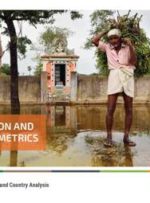 This report from the Global Alliance on Health and Pollution (GAHP) updates findings from The Lancet Commission on Pollution and Health, and provides a ranking of pollution deaths on a global, regional and country level. The report, which uses the most recent Global Burden of Disease data from the Institute of Health Metrics Evaluation, underscores the extent and severity of harm caused by air, water, and occupational pollution. 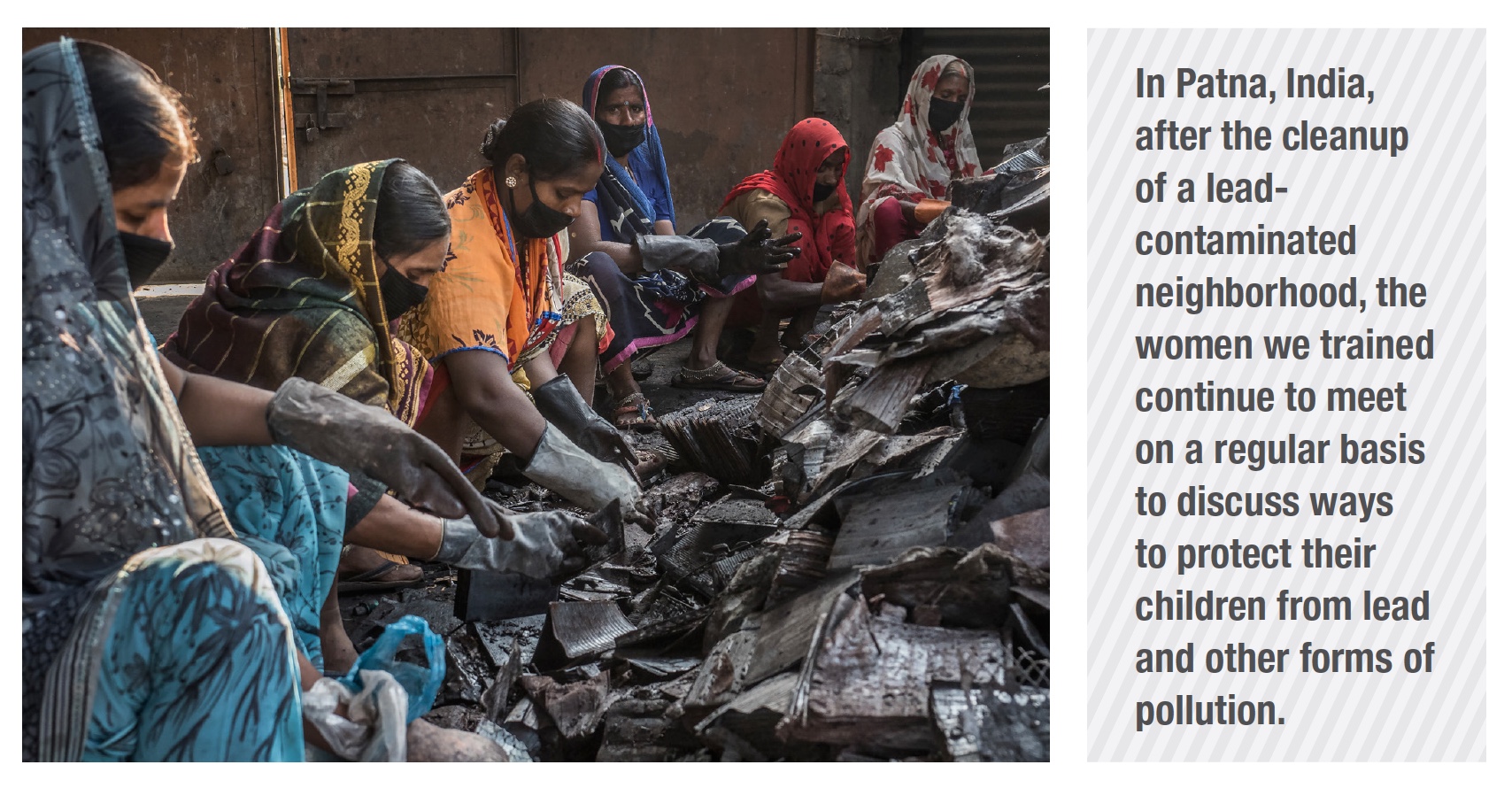 Toxic pollution causes immense harm to women, threatening maternal and child health for generations until the exposure pathway is stopped. 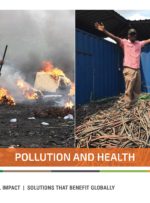 Pollution and Health: Overview and Solutions

Modern, industrial pollution is a growing threat to health all over the globe, responsible for 9 million deaths in 2015.  But pollution poses the greatest threat in low- and middle-income countries, where 92% of these deaths occur.  This fact sheets lays out the evidence and suggests seven priority program areas to protect human health. 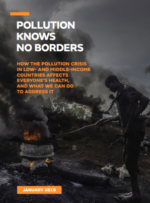 The Pollution Knows No Borders report shows how toxic pollution travels from country to country, not only in the air and water, but also in the food and products we buy.  We are all affected. We are all connected. Our children are the most vulnerable victims. Learn more about why this is one of the biggest health threats and what we can all do.

This updated fact sheet lays out the most recent data on the impact of pollution on health in low- and middle-income countries and specifically lays out the leading causes of death and the portion of the mortality caused by pollution.

The Poisoned Poor documents, prepared by the GAHP, summarizes key issues about the people most affected by toxic pollution. Toxic chemicals from industry and mining affect the health of hundreds of millions of people in low- and middle-income countries. Heavy metals, pesticides, solvents, radionuclides and other toxic substances can be found at dangerous levels at thousands of sites around the world, in drinking water, soil, air, and food. These chemicals (lead, mercury, chromium, and cadmium, etc.) affect local populations in the poorest towns and neighborhoods, especially children.

A recent study of more than 3,000 toxic sites, funded by the World Bank, European Commission and Asian Development Bank, shows that as many as 200 million people may be affected. A detailed analysis of 373 contaminated sites in India, Indonesia and the Philippines calculated that the amount of disease caused by toxic exposures was similar to that of malaria or outdoor air pollution in those three countries. The impact of these diseases, and the commensurate loss in economic capacity, is enormous.

Global Picture of Death from Pollution

A summary of global deaths from pollution. Pollution is a much bigger problem than HIV, malaria, or TB. One in seven deaths in LMICs are caused by pollution.

WHO: Health Impacts of Chemicals

WHO Manual: The Public Health Management of Chemical Incidents

The purpose of the WHO Manual for the Public Health Management of Chemical Incidents is to provide a comprehensive overview of the principles and roles of public health in the management of chemical incidents and emergencies.

Summarizes scientific evidence and provides risk management recommendations for the 10 chemicals or groups of chemicals of major public health concern.

The WHO Human Health Risk Assessment Toolkit: Chemical Hazards provides users with guidance to identify, acquire and use the information needed to assess chemical hazards, exposures and the corresponding health risks in their given health risk assessment contexts at local and/or national levels.

Summary of the issue prepared for the European Commission in Brussels.

The Global Health Footprint of Development

Brief Introduction to: The Economic cost of Inaction and Impact on Poverty, Development and Urbanization. Presented to European Commission in Brussels, Oct 2013

Burden of Disease from Chemical Contamination

A summary of the issue and potential solutions.

Environmental pollution: An enormous and invisible burden on health systems in low- and middle-income countries

Diseases caused by pollution increase health care costs, especially for high-cost NCDs. They impose an unnecessary load on health care delivery systems by increasing hospital staffing needs and thus diverting resources from essential prevention programmes such as childhood immunizations, infection control and maternal and child health. They undermine the development of poor countries by reducing the health, intelligence and economic productivity of entire generations. Pollution is highly preventable and pollution prevention is highly cost-effective. Yet despite their high economic and human costs and amenability to prevention, the diseases caused by pollution have not received the attention that they deserve in policy planning or in the international development agenda.

Given the great impact of pollution on health and health care resources and the high cost-benefit ratio of pollution prevention, efforts to mitigate pollution should become a key strategic priority for international funders and for governments of LMICs.

Assisting LMICs to prioritize disease prevention through the management of pollution is a highly cost-effective strategy for enhancing population health, reducing the burden on limited health resources and advancing national development.

Report Released by: Blacksmith Institute For A Pure Earth, Global Alliance on Health and Pollution and Green Cross Switzerland

This year’s report, Top Ten Countries Turning the Corner on Toxic Pollution- 2014, tells the remarkable stories of 10 successful cleanup projects that are saving lives, improving community health and restoring the environment. From Vietnam to Kyrgyzstan to Senegal, the success of these projects was the result of unique partnerships and creative solutions.