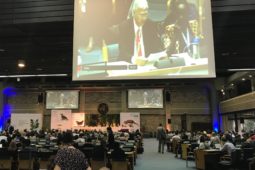 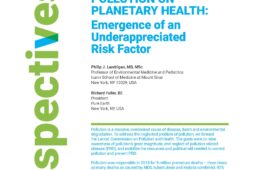 THE UNEP has published “Perspectives No. 29” focusing on “The Impact of Pollution on Planetary Health: Emergence of an Underappreciated Risk Factor.”  The document is co-authored by Philip Landrigan and Richard Fuller, co-chairs of The Lancet Commission on Pollution and Health. This perspective pulls from insights gathered in the landmark report released by the Pollution Commission in […] 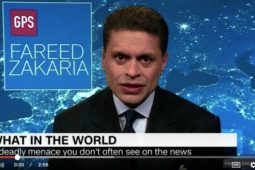 The world is starting to wake up to the true cost of pollution, and the cost of inaction. Since the report from The Lancet Commission on Pollution and Health was published on October 19, it has reached over 1.8 billion people through extensive coverage in major newspapers, TV, and radio outlets worldwide. Now, key voices are uniting in their understanding […] 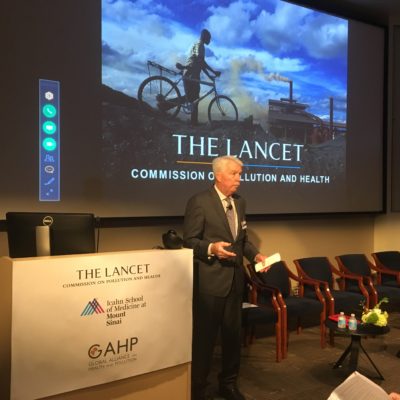 Special Update: The Lancet Commission on Pollution and Health Reaches Over 1.8 Billion Worldwide

The Lancet Commission on Pollution and Health was published on Oct. 19 following two years of work from Commissioners from around the world, consisting of many of the world’s most influential leaders, researchers and practitioners in the fields of pollution management, environmental health and sustainable development. The landmark report generated intense global interest with news of the Commission’s findings […] 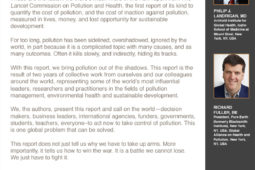 An Open Letter: It Is Time To Put Pollution On The Map

The new report from The Lancet Commission on Pollution and Health, published on Oct. 19, pinpoints pollution as the cause of 1 in 6 deaths worldwide, with children and the poor being the most vulnerable. We cannot afford the health and economic impacts.  This is our call to action. Read/download the open letter in pdf

New and Noteworthy GAHP Pollution Info-sessions Our second Pollution info-session by Dr. Jack Caravanos on The Chemistry of Environmental Mercury, and our third by Jennifer Chapin and Sandra Page Cook on the AuthorAID researcher network, were a great success. We are extremely pleased with the positive feedback. We hope you will continue to join in […]

We hope this update finds you well and looking forward to a healthy and Happy New Year! Important Updates: As you know, the Commission Report is now with The Lancet undergoing peer-review. We are hoping for a publication date in April 2017. The Commission communications campaign will begin this Thursday, January 12, 2017, and continue […]

The Global Commission on Pollution and Health has been submitted to all GAHP members for final review and comment. If you are a GAHP member and did NOT receive a copy, please email Rachael at [email protected] immediately. Comments/edits are due in track changes by 14th November to Elena Rahona at [email protected] New and Noteworthy New report from […]

The next GAHP annual meeting will take place on October 6, 2016. For details about attending, please contact [email protected] New and Noteworthy New Report: Duty To Prevent Childhood Exposures The U.N. Special Rapporteur on Human Rights and Toxics, Baskut Tuncak, has released his 2016 report on our collective “Duty To Prevent Childhood Exposures” from toxic chemicals […]

New and Noteworthy A draft of the Global Commission on Pollution, Health and Development report was circulated to a wide group of reviewers in June. Some excellent comments were received and discussed at the June meeting in New York. Comments have been incorporated and the next draft will be available soon for review. Publication of the Commission […]