At the Berlin Forum on Chemicals and Sustainability: Ambition and Action towards 2030, GAHP chairman Richard Fuller highlighted that lead (Pb) accounts for half of the global burden of disease from chemicals, poisoning 1 in 3 children worldwide.

The German Federal Minister for the Environment, Nature Conservation and Nuclear Safety, Svenja Schulze, moderated the forum, held virtually on July 7th and 8th. The Ministry organized the Forum to raise political awareness of the Fifth Meeting of the International Conference on Chemicals Management (ICCM5), which was postponed due to COVID-19.

During the panel discussion regarding the sound management of chemicals and waste for achieving the SDGs, Fuller presented Institute on Health Metrics and Evaluation (IHME) data, which shows that there are 1.8 million premature deaths from chemicals each year. Around half of those are occupational exposures (870k annual deaths). The other half is from environmental exposure to lead (Pb) (900k annual deaths). 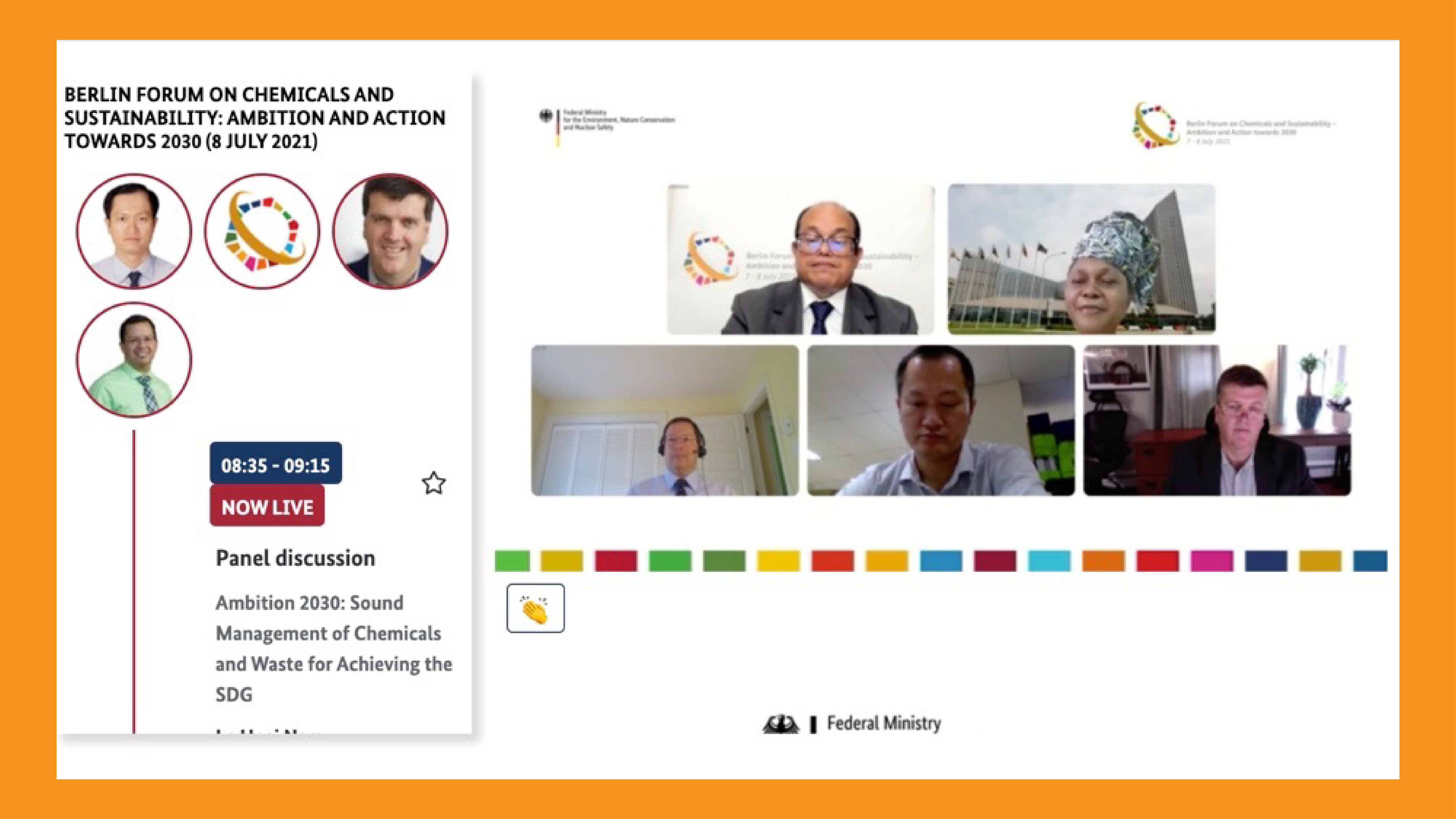 GAHP Chairman Richard Fuller presents during the panel discussion regarding the sound management of chemicals and waste for achieving the SDGs.

“We must acknowledge that lead (Pb) accounts for more than half of the current global burden of disease from chemicals.”

According to The Toxic Truth report (UNICEF & Pure Earth), the main sources of lead poisoning in low- and middle-income countries are unsafe lead-acid battery recycling, colorants added to spices, and cookware, including pottery and aluminum saucepans. Leaded paint also contributes to exposures.

Fuller went on to emphasize that the negative health impacts of lead are severe. High levels of lead exposure in pregnancy can cause miscarriage, stillbirth, premature birth and low birth weight. Children are particularly vulnerable to lead poisoning due to their smaller size and higher rates of lead absorption. Blood lead concentrations as low as 5 µg/dL are associated with behavioral difficulties and learning problems in children. Even low levels of childhood lead exposure are associated with increased risk of death from cardiovascular, liver and kidney disease later in life.

Despite this, lead was rarely mentioned during the forum, reflecting the fact that lead has still to receive political attention in international agendas.

Earlier during the forum, the Director General of the Federal Office of Environment and Nature, Katrin Schneeberger, announced that Switzerlandwould be proposinga Resolutionat theresumed session of theUNEA 5 in 2022to launch a negotiation process for a Science Policy Interface (SPI) for Chemicals and Wastes. The Austrian Minister, Leonore Gewessele, as well as the UK Minister, Rebecca Pow, also called for a SPI. The French State Secretary, Karine Bouquet, called for an international platform for scientific consensus. Fuller welcomed the proposal for an SPI but stressed that it should have a wider remit than chemicals and waste and include all forms of modern pollution such as particulate matter in air caused by transport and industry, to address the growing burden of disease from pollution.

Pollution disproportionately kills vulnerable populations. According to the 2017 Lancet Commission on Pollution and Health, it is responsible for one sixth of global deaths each year, with 92% of those deaths occurring in low- and middle-income countries. Chemicals and wastes are major contributors to pollution’s burden of disease.

An SPI that includes all modern pollution – pollution due to industrialization and urbanization – is necessary to put pollution on par with biodiversity and climate change in terms of global environmental priorities. Doing so will help communicate the severity and urgency of pollution– including lead – as well as the many available solutions to policymakers.